Bully offers are back in Toronto.. 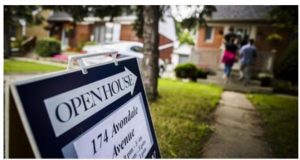 Toronto’s real estate market is showing renewed strength, with bidding contests and bully offers making a resurgence after a torpid summer. David Fleming of Bosley Real Estate Ltd. was caught off guard when he took his clients to see a house in the Beaches area and soon learned that a bully offer had landed.

“I didn’t think it would happen.”

The house with an asking price of $699,000 likely would have sold for $900,000 in the spring, Mr. Fleming says. But as the fall market got rolling in September, most buyers still appeared cautious and he advised his clients to consider offering $825,000 to $850,000. While they were still contemplating, the homeowner accepted $806,000 from the fast-acting bully.

“The seller took $806,000 because maybe they were spooked,” says Mr. Fleming. He says the grim news from May through August about dropping sales and sliding prices had ratcheted up the anxiety level. The average price in the Greater Toronto Area at the end of August stood 20.5% below the high water mark in April…..